skip to main | skip to sidebar

Buzzati at the Giro - An Introduction 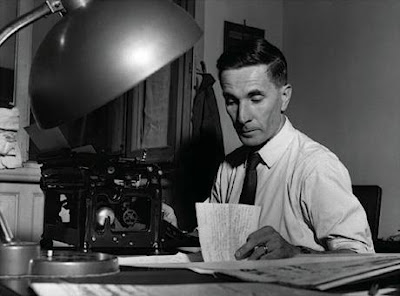 
For it's daily coverage of the 1949 Giro d'Italia bicycle race, the Italian evening newspaper "Corriere della Sera" sent, not a sports writer as one might have expected, but Dino Buzzati; journalist, author, poet, painter, and playwright. Though not an expert on the strategies, tactics or history of Italy's most popular sporting event, Buzzati quickly grasped the significance of the Giro's traditions and legends, and the important place it held in the hearts and minds of the Italian people.
.
Luckily for Buzzati (and us) the 32nd running of the Giro would prove to be an important moment in cycling history, as the two greatest champions of the time battled for fame and victory. One of these riders would go on to become the greatest cyclist the world had ever known, a super-champion or "campionissimo", performing feats of strength and endurance unimaginable by the cognoscenti, aficionados and medical experts of his time. The other would go on to achieve marvelous results of his own, though often he would find himself one step below the campionissimo on the world's victory podiums, and in doing so would display stubborn conviction and self-sacrifice no one could have expected.
.
But that all happens later - for the moment Dino Buzzati is just beginning his trip around the Italian boot, accompanied by the most famous and popular athletes in Italy, their anonymous support riders and team personnel, and a small army of sports journalists - as varied and interesting as the racers themselves.
.
And as a background for this voyage into the unknown there is the entire country of Italy, worn-torn and impoverished, scarred and ruined by the Second World War. It is a nation of poor peasants, wealthy aristocrats, Catholic bureaucracy and deep religious convictions. It is a land of olive groves, steep vineyards, industrial cities, and the art and culture of an ancient society. Within this rich tapestry Buzzati will find stories of triumph and failure, joy and pain, celebration and human folly.
.
Buzzati's articles, written in such rich prose, give us a wonderful look at special moments from sixty years ago. Some are accounts of events which are well documented in the literature of bicycle racing history, but some are subtle and obscure - not cycling-related at all, but glimpses of life in a place and moment we can never see for ourselves, lost as they are in the passage of time. Empty, dusty roads, nearly devoid of automobiles. Bomb-damaged cities without electricity or plumping. Aging survivors of the war who once-again pedal their bikes across the rude terrain. Fresh young riders raised in a world of depravation and danger, free now to race across the mountains toward the horizon.
.
A few years ago VeloPress publish an English-language version of Buzzati's articles, "Bartali vs. Coppi at the 1949 Giro d'Italia". Some sections are rather poorly translated, some are carelessly written, and the book gives only the slightest hint of the beauty, rhythm and emotion of Buzzati's Italian prose. Thus, I decided to translate the articles myself, using what ever means available to obtain copies of the original Italian text from friends, books, and the Internet (thank you to everyone who has contributed to the collection of paper stacked high on my office desk).
.
Please keep in mind that this is still (after nearly seven years) a work in progress, and each year brings new pictures or articles or other reference materials. I think this is the third edition... please feel free to send corrections or suggestions as much of the story is still guesswork and I feel I still don't have the entire picture. For instance, did you know Buzzati's articles about the Giro continued even after the finish? But try finding copies of those! And I'm STILL trying to find a picture of the Edelweiss team jersey (I have pictures of all the others, and even color drawings).
.
Well, that's the story of how this all got started. Now let's get into the spirit of the thing.
Imagine what it must have been like. The jerseys are simple, one or two colors, with only the bike maker's names embroidered on the tough wool, front and back pockets stuffed full of supplies for the day's racing.
.
The riders wear thin cotton cycling caps or go bareheaded. Thus you can see the color of their hair, the shape of their heads, the set of their brows. Their eyes aren't hidden behind sunglasses - they wear goggles when the road is dusty, but at the finish you can look at them and see the face of Man Victorious, or Man Defeated, of Man Devastated and in Pain.
.
Imagine the bikes - a flowing garden of colors, distinctive and instantly recognizable, but look at that dingy cloth tape, polished by hands and dust and sweat, worn thin by thousands of kilometers on the road. See the dazzling chrome details and components - in a land where everything is worn and gray only the churches have more colors, more sparkles.
.
This is the scene we step into tomorrow when we begin coverage of the 1949 Giro d'Italia.
Aldo Ross
at 6:14 PM